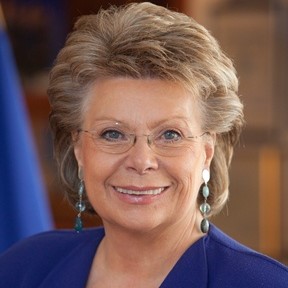 Viviane Reding is an influential actor in european affairs and an experienced observer of geopolitics.
She has served as an elected member of national and european Parliaments for more than two decades.
She was appointed as member of the European Commission for three mandates. First responsible for culture and education, then for telecoms and technological research and finally -as First Vice-President of the Commission- for justice and fundamental rights.
Viviane Reding is a national of Luxembourg. She holds a PhD from the Sorbonne (Paris), honorary degrees from world-renowned universities as well as several national distinctions. Viviane Reding is fluent in four languages.

All sessions by Viviane Reding